You are an obsession…

I haven’t collected anything since I was a tween, and I fell in love with keychains. Now I’m adult, and I’ve found something to collect: Vinylmation. There’s just something about this Mickey Mouse-shaped canvas that I can’t resist.

It won’t affect anything, but I’m banning BP
Brotherly Love 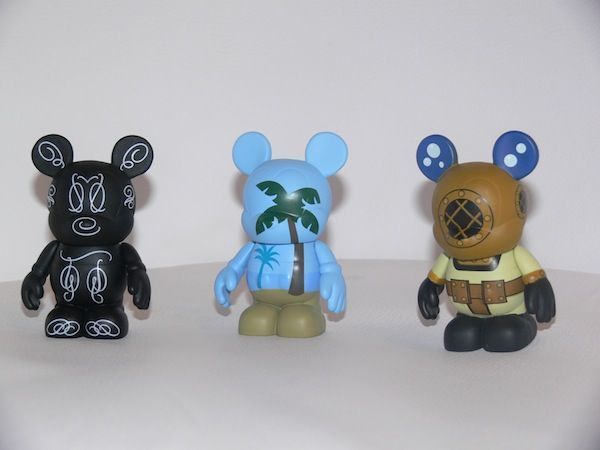 [dropcap3]T[/dropcap3]his should be a post about Zachary’s 7th birthday, but since he still has his bowling party tomorrow this is going to be about my new obsession: Vinylmation. When I first saw these little 3″ figures in the Orlando airport in April I remember looking at them and wondering what in the hell they were. Needless to say I did not purchase any.

Fast forward a few months and a trip to Downtown Disney for the Goose’s 7th birthday. We’d already spent time building his RC car and were just wandering around when we went in to the Vinylmation store. While Zachary colored his VM coloring page to look like the VM he liked, I walked around. I decided to take the plunge and bought three boxes from the Urban 3 series. Now the intriguing thing about this whole VM craze is that you buy the boxes “blind” and don’t know what you’re getting until you actually buy them and open them up. Of course this is a brilliant marketing scheme by Disney but we won’t get into that here. I actually chose well and the first two I opened were vinyls I wanted. The third, not so much. But the nice thing about buying these in the store is that you can exchange ones that you don’t like. With the guidance of the nice sales man I ended up with the Palm Trees vinyl that Zachary had colored. Yay for me!

Unfortunately now I’m hooked. It turns out these things can turn into collector’s items after a while since the collections are discontinued after awhile. And they’re pretty damn cute. In addition to the three I purchased at Downtown Disney yesterday, I managed to pick up a few on eBay as well. Not the coveted Balloon “chaser” which is going for over $300 these days (yes, 3-0-0), but a few cute ones I will enjoy.

7 Comments on “You are an obsession…”