By melissa
Filed Under: Blog, The Junk Drawer

It won’t affect anything, but I’m banning BP

History is bound to repeat itself, if you don’t learn from it the first time. Once again, we have oil in the water.

We’ve lost a tooth!
You are an obsession… 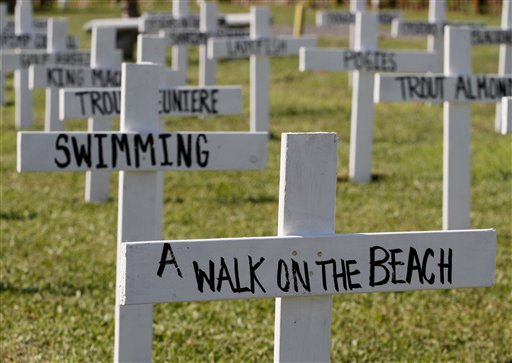 [dropcap3]I[/dropcap3]’ve done a really good job of burying my head in sand, so to speak, regarding the horrific BP incident in the gulf. Of course the media is doing a great job of helping me in this regard. I honestly believe we have not seen half of what is really going on. Notice how it’s always the same video shot from BP, or the same isolated beach shots? I’m guessing that like myself, most people want to stay blissfully ignorant as to the oil leak in the gulf. With ‘top kill’ failing miserably, however, that is increasingly unlikely.

I drive past a BP station everyday and have never given it much thought until (obviously) recently. I don’t recall ever getting gas at a BP, mainly because RaceTrac and 7-Eleven are on the routes I take in my everyday routine. When I drive past BP now, however, I get a sick feeling in my stomach that lasts until I get home, and the same thoughts run through my head: I may be a hypocrite, but I have to drive (especially in central FL). I refuse to stop at BP, however. As I was thinking this the other day I was surprised to see how many people were still getting gas at BP. I would think that with this oil disaster people would be shunning BP gas stations like the plague. I was disheartened to see this isn’t the case.

I know my personal ban on BP won’t change a single thing but it gives me some sense of action. I can’t say I’m driving less, because I really don’t drive that much to begin with. Mass transit, which is all but nonexistent in the area I live in, is also not an option. I guess I’ll have to take my small victories and in the meantime, pray that God, or Buddha, or Allah or someone is looking over the Gulf and will intervene to protect what is left to protect. BP certainly can’t be counted on to do it.

11 Comments on “It won’t affect anything, but I’m banning BP”