Some things do get better with age. That goes for Las Vegas, too. Chris and I celebrated our tenth wedding anniversary back at the scene of the crime and had a better time than when we got married!

John Hughes. He spoke to all of us 30-somethings.
Trauma, thy name is fat lip 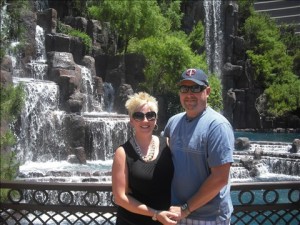 Viva Las Vegas! I know, really cliché, but really true! Chris and I spent 4 wonderful days in Sin City, celebrating our TENTH wedding anniversary. We planned it for a year, actually followed through, and had one of the best vacations ever. Maybe because the kids were back at home? 😉 For those of you interested in our fantastic trip, or if you just want to hear about a totally cool, new off-strip resort and see some fun photos, read on!

I will probably spend most of this post discussing a fabulous place called The M Resort. ((Of course it’s fabulous–it’s named after me 😉 )) I came across the resort while trolling the web looking for great Vegas deals. And a deal I got! We paid $74 a night (including Fri and Sat) and even though the resort tacks on a $25 resort fee per day, our deal actually gave us a $25-a-day hotel credit to be used anywhere in the hotel! Of course Chris and I had NO problem spending that! 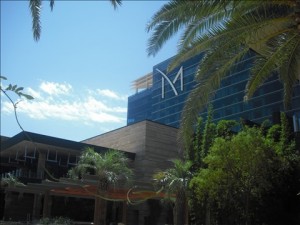 The M is truly a beautiful place and we were thrilled to see $5 minimums at the craps table, and find that the six restaurants offered competitive pricing. I guess being 9 miles off the strip you have to make some concessions! We spent our first evening (Thursday) really just hanging out and enjoying being a) in Las Vegas and b) kidless! While Chris went to play in the 6:00 Hold ‘Em tourney, I was anxiously awaiting the arrival of two of my eFriends (who I am proud to call my friends now), Perpelina and Cajun Vegan.

We hung out at the Lobby Bar enjoying a pitcher of something very summer-ish and just chatting. I truly felt at ease with them both and was disappointed when the time came to say good-bye. ((I was on vacation, and they, unfortunately, were not.)) Believe it or not, our first night in Vegas ended pretty early (by Vegas standards). That 3-hour time difference is a bitch! 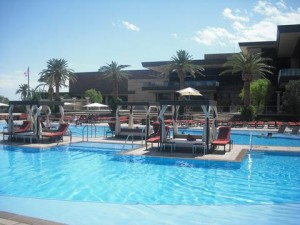 Good morning Friday and Happy 10th Anniversary! Chris and I spent a leisurely morning reading in bed. Yes, reading in bed! No kids, no work, no nothing. We could do whatever the hell we wanted! After an über-delicious breakfast buffet we hit the pool. AND WHAT A POOL! I felt like I had just walked on to the set of a movie. Sweet cabanas in the middle of the pool, ivy-lined walls, gaming tables outside…it was pretty fantastic. We grabbed some chairs by the water, grabbed a few drinks ((Hey, we’re on vacation!)) and proceeded to do more of nothing!

Our anniversary dinner at Hugo’s Cellar in the Four Queens casino on Fremont street was amazing. Chris and I made our own surf ‘n turf. I ordered seafood, he ordered steak, and we chowed down. It was great enjoying a meal in a place where I’m not allowed to write on the table with my crayons. 🙂

We did make it to The Strip on Saturday thanks to The M’s free shuttle. Of course it dropped us at the Fashion Show mall and the Puma store was just calling my name. So was the iPod custom wrap cart and Sephora. 😆 It was definitely hot, but we certainly weren’t complaining. No humidity!

Chris also scored us a free dinner at The M’s Japanese steakhouse at the top of the resort by charming the pants off of the craps pit boss. We may not have come home with any money, but we certainly came home with some great memories!