Today is Word Aids Day. Being a member of Bloggers Unite, I am writing about this topic today to help spread awareness. My contribution? Dispelling a few common myths regarding Aids.

Myth #1: HIV and AIDS are the same thing.

Many people are under the misconception that the terms HIV and AIDS are interchangeable. This can be a deadly mistake—HIV and AIDS are not the same thing. In simplified terms, HIV is the actual infection itself. HIV is not AIDS. AIDS is what happens when the immune system becomes compromised, leading the way to infections that are mainly harmless to the average person. Using a very simple analogy, it’s like a healthy person catching a cold and having it turn into a sinus infection. Except a sinus infection won’t kill you.

If detected early and treated properly, HIV doesn’t escalate to AIDS for years, and in some cases, decades. The best example is, of course, Magic Johnson. He was diagnosed with HIV back in 1991. That’s 17 years ago, and he is still AIDS-free.

So unless you consider sex, blood transfusions, or giving birth casual contact, you’re okay talking to someone with HIV and/or AIDS. Hell, you can even shake their hand or give them a hug.

Here’s how you can contract HIV:

Myth #3: HIV can infect only homosexual men and drug users.

This is the most dangerous of the HIV/AIDS myths out there. HIV/AIDS can infect anyone. HIV does not care if you are white, black, gay, straight, Buddhist or Catholic. If you engage in high-risk sexual practices, are a drug user sharing needles and syringes (or both) HIV may eventually find you.

There are more myths out there, both old and new. (I like the “sex with a virgin will cure HIV. That’s a good one.) Do some research. Be informed. 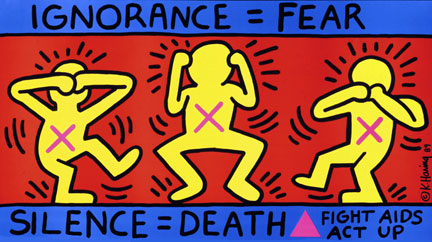