Enough about Jonah, let’s talk more about me

Damn Facebook! I was tagged by so many people for the “25 random things about me” I think I have permanent paint drips. While I want to feel honored that all of these people care, it’s really just your average chain letter–complete with “send this to 25 people”–and I happen to actually have a good number of friends on Facebook.

So here you are: 25 random things about Melissa.

Enough about me, let’s talk about Jonah
Ode to Red

I swore I wasn’t going to do this. I’ve managed to not do it since I was first tagged a few weeks ago. It’s now being talked about in all sorts of places, including MTV, ABC News, and USA Today. You know what I’m talking about. The much loved and ever hated “25 random things about me.”

I’m not one to ever miss a party, so here I am, adding my 25 things to the millions of other useless things other people have said about themselves.

25 random things about me 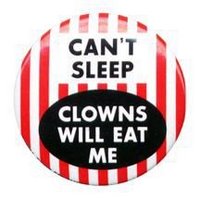 And there you have it. You can all stop tagging me now!

This post was generously brought to you by promotional pens. Here’s another random fact: I love pens!

Tags: 25 random things about me, Facebook, facts about me, Me, memes, tagged, wife of the year

7 Comments on “Enough about Jonah, let’s talk more about me”