Entering the house after school to the strains of Alison Moyet belting out the lyrics to “Don’t Go” was a turning point in my musical life. 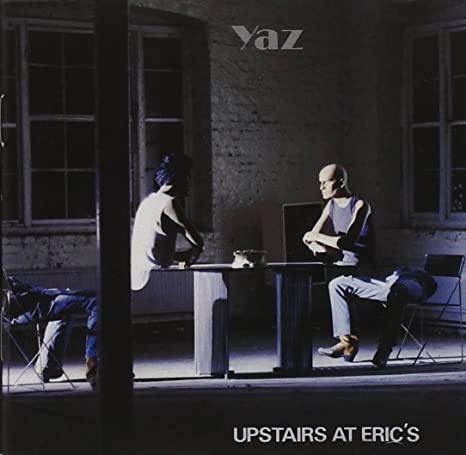 I stole this album. It sounds awful, I know. But hey, I was 13 years old when I came home one day to find five strangers hanging out in our basement. Turns out, mom had rented the basement to some unemployed chick she knew from the bar. As a single parent raising two kids on a waitress salary, every little bit helped. Still, it was a little disconcerting to find a bunch of strangers in my house when I got home from school.

I can’t remember her name. Lori, maybe? My mom wasn’t home a lot, but Lori certainly was, along with groups of 2–3 people on any given day. They would sit around, smoking pot and drinking beer, and listen to music. All kinds of music. My mom had a pretty nice turntable for a single parent, and Lori took advantage when mom was working. Not that I minded—it was nice hearing something other than Neil Diamond or Barry Manilow.

Before anyone gets their britches in a twist, I love these old guys as well, but a tween girl needs some other form of musical inspiration, not two sappy leftover dudes from the 70s—and Lori sure provided that, in the form of an amazing record I’d never heard before. Entering the house after school to the strains of Alison Moyet belting out the lyrics to “Don’t Go” was a turning point in my musical life.

Baby make your mind up give me what you got
Fix me with your lovin’ shut the door and turn the lock
Hey go get the doctor, doctor came too late
Another night I feel alright my love for you can’t wait

This album shook my musical foundation, and there was no going back—paving the way for musical influences that would come later (I was a late bloomer in many ways), Yaz’s “Upstairs at Eric’s” was the first step in breaking away from the music that I grew up with. And what a step it was!

It was also, apparently, my first step into larceny. Lori’s stay with us was short lived. Shocking, I know. She moved out a few short months after she moved in, and while I don’t think of her (I don’t even know if her name is really Lori), I do think of those few months fondly. She was a cool chick who was friendly and had an extensive music collection that she shared freely.

When she unpacked at her next rest stop, I wonder if she even noticed that “Upstair’s at Eric’s” was missing? I’d like to think that she did, and that she smiles fondly, knowing it was me and how much nerve it had to take to sneak into the basement on her last day with us and pinch that vinyl.