The Web-Betty Blog
All Me 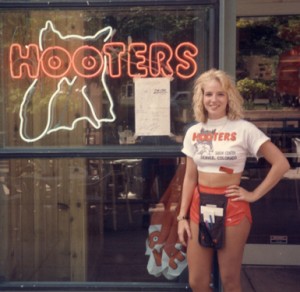 Yes, I worked at Hooters. You got a problem with that?

Yay, I’m back in high school again. Ok, not really, but the Un-Mom has tagged me, so I guess I have to go back. Back to big hair, bad music, pom-poms and angst. Great.

So, without further ado (To plagerize the Un-Mom), here are 7 things you should know about me as a teenager:

Now it’s my turn to tag. I know she’s probably sick of being tagged, but that’s what happens to the popular girls…they get tagged! So, Miss Caught Up, go go go and relive your teenage years! I’d also like to know more about the teen years of:

Dagny a.ka. Scratch Bags: because she seems like a cool chick!
Daddy Papersurfer: I don’t know if he’ll participate, but it would be fun to hear about the “olden days”!
Atomic DogmA: DP knows all the fun people.
Probably Sucks: I want to read what crazy shit he’ll write!

I’m only tagging 5 people. The rest of you, use the comments and tell me something about you as a teenager!

I hate sinuses and the new Pepsi logo, among other things: Random Tuesday Thoughts

"Are we so lost we have to be sold our own democratic right?"